Grandma’s and Grandpa’s Kitchen Tools to Search For

Home/Self Reliance, Usage/Grandma’s and Grandpa’s Kitchen Tools to Search For
Previous Next

Grandma’s and Grandpa’s Kitchen Tools to Search For

I’ve discovered something that was rather surprising – that the ways we do things today aren’t necessarily the best ways to do them. As we look back in time we see that our ancestors had many ways of doing thing that have been lost to us today. While today’s methods meet today’s needs, they may not be the best ones around. There are many cases where the tools our ancestors used produced better results than what we manage today.

You can still find many of these tools, often at garage sales and flea markets. People look at them as novelties today, but if we ever had to return to a simpler way of life – such as after the destruction of our electric grid – those methods would be the only way that we could do many things. Therefore, it makes sense for us to prepare today, buying the tools and learning how to use them.

While there are still places where these tools can be bought new, they can also be found at garage sales and especially at estate sales. Often, the people who have them have no idea what it is that they have, so they are willing to let them go cheap. That gives you and I a chance to pick them up at a great price.

Since we’re talking about homesteading, let’s start out with kitchen tools; there are a lot of them. An incredible amount of effort has gone into making the job of the homemaker easier, mostly because it is very profitable to do so. So the modern kitchen is filled with electronic appliances, many of which are highly specialized devices. But that doesn’t mean they are the best way to go. 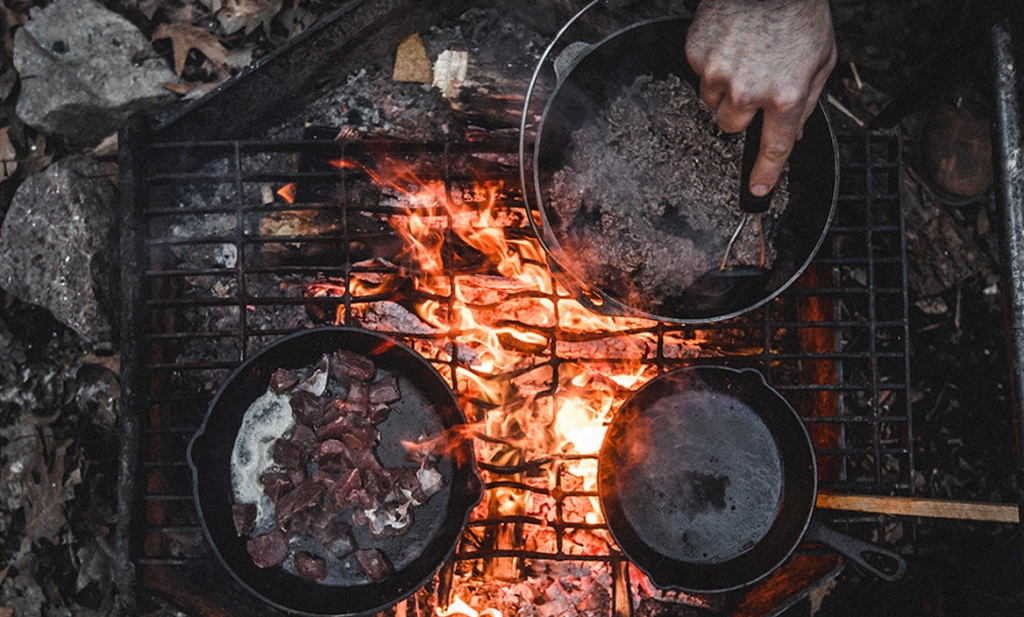 Cooking outdoors on the grill is one of the great American pastimes, especially in warm weather. It’s a great time to get together with family and friends over some good food. Cooking outdoors makes it especially nice, because we don’t have to heat up our kitchens. Only. . . we still heat up our kitchens.Maybe the meat gets cooked outdoors, but we still cook a lot in the kitchen. Why not cook all the rest of that food over the fire as well? With a cast-iron Dutch oven that’s easy, as it won’t be damaged by the heat from the coals. You can even bake in one, heaping coals on the lid so that the baked goods are surrounded by heat.

There are starter sets to begin with and as you gain the experience and network in the Dutch Oven crowd… yeah there are clubs and everything… you will be able to see which sets are better and more efficient to utilize with this type of cooking. 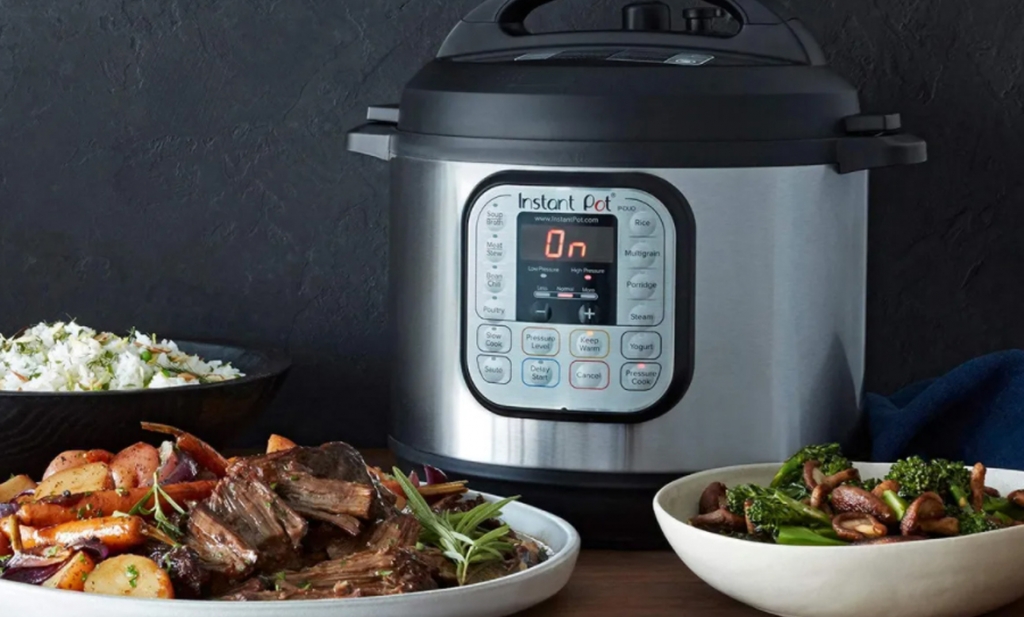 When I was young, before the time of microwave ovens, pressure cookers were still fairly commonplace. Cooking under pressure causes water to boil at a higher temperature, cooking food faster. While it is not as fast as a microwave, the food comes out tasting a whole lot better. Most f our grandparents or parents used to get it out Sunday morning, put some bits and bobs with a side of beef or hamhock and you would come back in the afternoon smelling the cooked meal all ready to eat.

There are hundreds, if not thousands of Pressure Cooker Recipes that can be had from your families cookbooks (check with grandma) or that can be found online with a simple search. You can take out a lot of the effort and the worry by utilizing this tried and true method of cooing dinner. 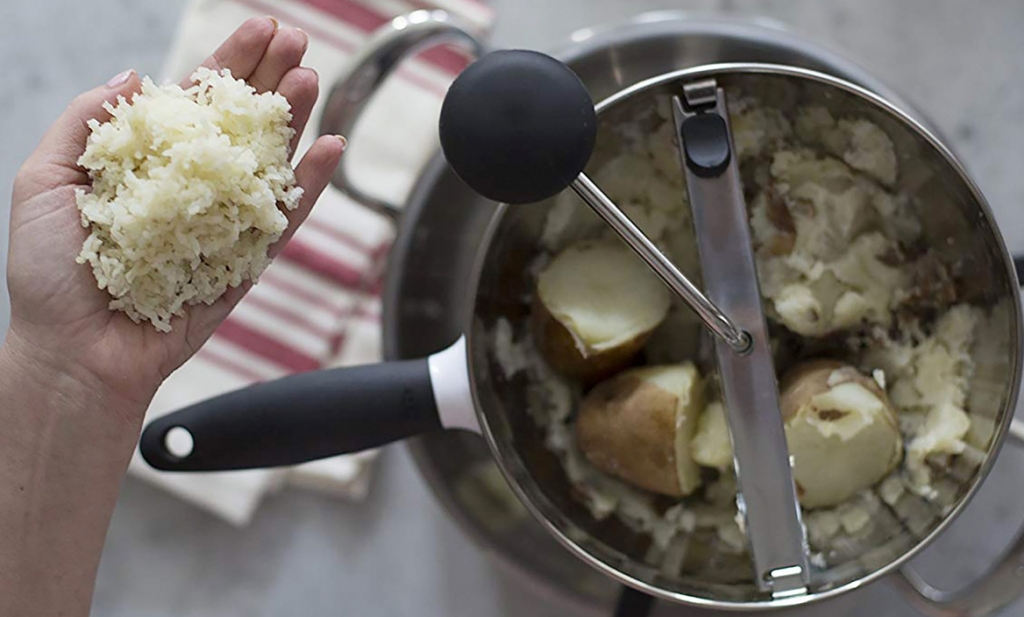 Anyone who is growing vegetables in their garden needs a food mill. This isn’t anything like a food processor, but rather more like a strainer with some emphasis on it. Purees, like puree of tomato, is pushed through the cone-shaped screen, providing an easy way of filtering out seeds, skins, stems and other solids. Not only does it work well, but it’s fast too.

It is also done under manual power, so if needs be, can assist you even when you have no access to electricity in a tight pinch.

Long before anyone invented the food processor, there was the grater [not pictured]. Food items were pushed across a variety of different sorts of blades, set into a stainless steel plate. The better graters had four sides, with different types of blades on each side. Food was shredded as desired, depending on the blade used.

While modern food processors can do the same thing, most people just seem to use the chopping blades. Then they have to clean the whole thing up, which is much more work than cleaning a grater.

Most of us have only seen ground beef in the grocery store. But once upon a time, you couldn’t get the beef you bought at the butcher or at the corner Piggly Wiggly, you had to do it yourself. Whatever happened to the home meat grinder? Once upon a time, you couldn’t have a kitchen without one. Not only did people make their own ground beef, but they used it to make sausage.

Yeah people did make their own sausage as well!

The meat of their choice would be brought home, ground, seasonings added, and the meat run back through the grinder to stuff it into the sausage casing.

Just about any type of sausage or lunchmeat can be made the same way. Salami, in all its variations, is essentially nothing more than a sausage that has been made this way, then left to cure. The salt and nitrates in the mixture are what cures the meat, preserving it. 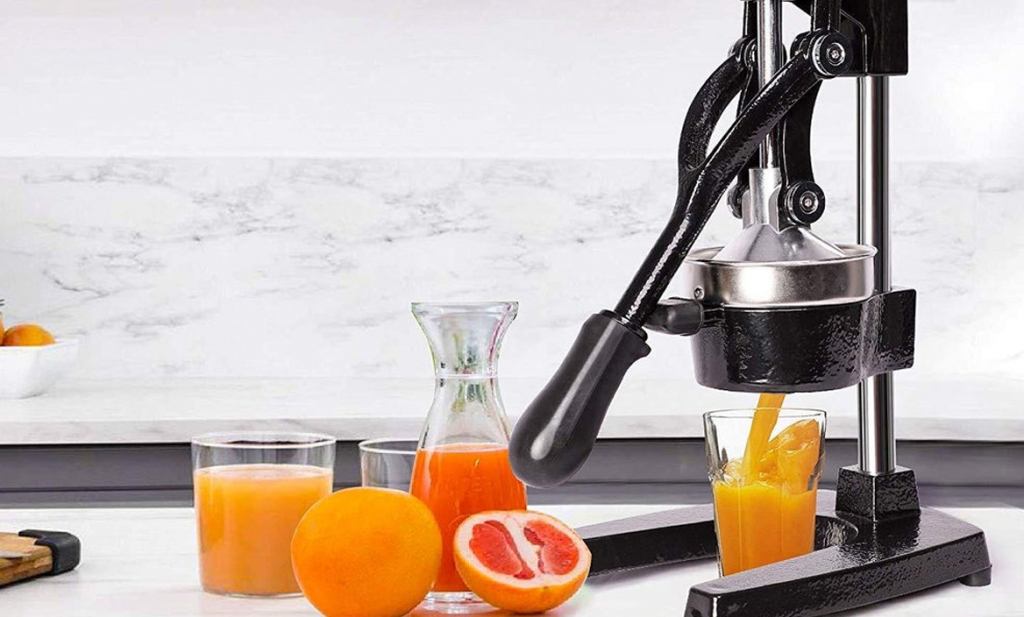 Nowadays, you have the electric juicers out there. Especially with the juicing and smoothie craze that has been happening the last decade or so. I’ve used many a juicer in my day and although there is something missing from the old ways of doing things… putting some muscle into it!

No, you can get those manual juicers which use leverage and give you a happy medium of gaining the juice and without working it out and without electricity. Rather than using a motor or depending on your muscle power to squeeze the juice out over a ribbed cone, my lever-arm juicer is a squeezer, with the advantage of having leverage to squeeze out the juice from oranges and other citrus. Faster and easier than an electric juicer, it also gets more juice out of the citrus fruits.

If you go to a fancy coffee shop, and want a “fancy” cup of coffee that’s not espresso based, it’s probably going to be made in a French press. This is one of the easiest ways there is to make coffee, but few kitchens have one anymore.

The French Press is nothing more than a glass container with a plunger that has a screen on it. Coffee grounds and hot water are put into the press and allowed to sit for four minutes (I usually shave this considerably). Then the plunger is pressed down (hence the name), pushing all the coffee grinds to the bottom so the coffee can be poured off. Quick and easy, and even better coffee. 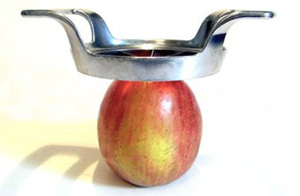 Slicing apples is a pain, one that we put up with regularly. Yet this problem was solved long ago by using an apple slicer and corer.

This simple device consists of a number of blades, mounted into a handle. All one needs to do is center it over an apple’s core and press down. Presto! Apple slices, with no core.

I don’t remember when the last time was that I saw someone use a manual eggbeater. Today we break out the electric mixer for just about anything, even if it is to just beat two eggs. To me, it’s much easier to break out a manual eggbeater and give it a spin. Not only does it do a great job, but it’s less cumbersome than getting out the electric one and putting the beaters in. If you put it in water right away, giving it a few revolutions, it just about cleans itself.

The meat hammer is something else that’s rarely seen in the modern kitchen. Instead, we use chemicals to tenderize our meat – chemicals that really aren’t all that good for us. It would be a whole lot healthier and not a whole lot harder to use a meat hammer to break down the meat’s natural fiber and tenderize it.