Here at ThatAquaponicsGuy, we like to focus on things like the lost ways and ancient knowledge. The forgotten skills that were the difference between life and death are dissolving in the storm of convenience. It can seem pretty horrific when you think about it. We have all heard the potential of being thrust back 250 years and how hard it would be for the average joe to survive for even a short period.

Within that ancient knowledge we seek after, there are also ancient staples that have lost their place in the hierarchy of needs. As populations grew and access to certain seeds became less, some plants that were used for grain and flour became prominent (wheat anyone and even quinoa to a certain point) and others a lot less. Amaranth is one such grain.

Amaranth lost its place to things like wheat and corn but this superfood was on the top of the heap for much longer than it has been buried by commercial agriculture. At least as early as 4000 BC amaranth had been domesticated in Mesoamerica. The seeds were used for toasting and eating or milling into flour. However, amaranth had many uses from dyes to other ornamental purposes.

There are over 60 varieties of amaranth native to the Americas. As you know, it’s always good to do business with native plants.

Why is Amaranth a Super Food?

It is used as a grain and considered a whole grain due to its similar nutrient profile. Amaranth originated in Peru but is now available around the world. In areas like India, Mexico, and Nepal, amaranth is an essential ingredient in traditional breakfast porridge. Amaranth is popular with those who follow a gluten-free diet. It is high in protein and packed with nutrition, making it a smart staple to keep on hand for any meal.

This nutrition information is provided by the USDA for a half-cup serving (123g) of cooked amaranth with no added fat or salt.

There are just over 125 calories and 23 grams of carbohydrates in a half-cup serving of amaranth. Most of the carbohydrate is starch (20g), but you’ll benefit from 2.6 grams of fiber.

Information regarding the glycemic index of amaranth is not widely available, but at least one published study estimated the glycemic index to range between 87 and 106 based on the preparation method. Other studies report that it to be as high as 107, making this a high glycemic food. The glycemic index estimates a food’s effect on blood sugar after consumption.

When amaranth is prepared without oil or butter, it provides less than 2 grams of fat per half-cup serving.

You’ll benefit from almost 5 grams of protein when you consume a half-cup serving of amaranth. As a complete source of protein, this grain includes all nine essential amino acids, along with lunasin, a peptide believed to have anti-inflammatory benefits.

A half-cup serving of amaranth is an excellent source of manganese, iron, copper, and phosphorus. It is also a good source of other nutrients including magnesium, vitamin B6, and selenium.

Whole grains like amaranth provide a wide range of health benefits, such as:

Amaranth is relatively high in protein, with about 30% of its calories coming from this key macronutrient. It provides lysine, an amino acid missing in many other comparable grains. It is also higher in the amino acids cysteine and methionine than in some common cereal grains such as rice and maize. Amino acids are the building blocks of protein.

One of the primary functions of protein is to maintain and repair muscle tissue in the body. When combined with a strength-training program and adequate calorie intake, protein helps your body to build healthy, lean muscle mass.

Higher consumption of whole grains, including amaranth, has been associated with a decrease in LDL cholesterol. The fat content of amaranth can vary based on the species and genotype. But researchers attribute the higher levels of fatty acids including palmitic acid, oleic acid, and linoleic acid along with the high content of the unsaturated hydrocarbon squalene for the lipid-lowering benefit.

Numerous studies have shown that a higher intake of whole grains has been associated with a reduced risk of cardiovascular disease and coronary heart disease. For this reason, many health organizations, including the USDA8 and the American Heart Association, recommend that you make at least half of your grain intake whole grains.

Studies have not only shown a decreased risk of heart disease when whole grain consumption increases, but they have also noticed a decreased risk for other diseases. A large research review published in 2016 found that whole-grain intake is associated with a decreased risk for cancer, respiratory diseases, infectious diseases, diabetes, and mortality from all causes (including non-cardiovascular and non-cancer causes).

If you are trying to reach or maintain a healthy weight, whole grains are your friend. The fiber and protein in amaranth can help you to feel full and satisfied after eating and the protein helps maintain muscle mass for a healthy metabolism. Of course, there are many factors that contribute to overall weight gain or weight loss, but at least some studies have indicated that whole grain consumption is sometimes associated with lower body mass index.

Growing Amaranth on Your Own

Growing amaranth is a very interesting adventure because it’s a plant native to Southern US states and even further south. This means that amaranth is used to those hot summers. It is also a very drought-tolerant plant. It can thrive outdoors as well as in. With enough direct sunlight or UV rays.

Depending on the method you’d like to use, you might consider starting amaranth indoors. If you are planning on growing lots of food, well, you will not want to start that many plants inside. You can sow seeds directly but you need to wait till there is no chance of frost.

The frost will be a big problem.

Amaranth is not a wide bushy plant and that is great. Because of this, you can get away with tight plantings. Look for about 10”-18” of spacing between plants. That is a big benefit if you are tight on space. This could be a better grain for you than, say, corn because of that space benefit.

Unlike some other grains, amaranth can be enjoyed as a whole grain, flour, and even as a green. 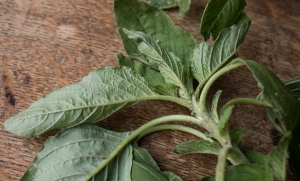 While amaranth is known for its grain you can also eat the amaranth leaves.

They are leafy greens that are delicious and do not get overly bitter in the summer heat. Treat them the same way you would treat chard, collard, or kale.

They are great stewed up with garlic and potatoes. This is a decent meal that can be had right from the backyard. Add some chicken or eggs and you really have some nutrition.

The most common preparation of the amaranth grain is to prepare it like a porridge. This preparation is very simple and requires that you understand a pretty simple ratio of 1:3. Use 3 parts water to 1 parts amaranth.

In other words, 1 cup of grain to 3 cups of water.

Bring the water to a boil and add your amaranth. Simmer, covered, for 30 minutes and you should be ready to dress the porridge up any way you like. Some people keep it simple with milk and brown sugar. You can also add things like freeze-dried fruits and honey for real flavor. 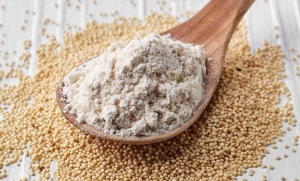 If you have a grain mill grinder, then making flour from your grain will be very simple. Amaranth flour is exceptional because of its high protein content. Its amino acid profile also makes it a very nutritious grain and is a great source of dietary fiber.

Even if you don’t have the means to grind the grains, you can always use a couple of bricks to do the grinding. It will be crude, and you will not get as good a product, but it will grind them down, nonetheless. You can treat amaranth flour as you would any other flour.

If you really want to start your day off right, you can make some amaranth pancakes! In this situation, you are simply subbing out the flour in a pancake recipe for your new amaranth flour. These are powerful pancakes that add that protein and dietary fiber to a breakfast that is usually just made up of white flour.

As you can see, amaranth is a tremendous plant that can be used in a number of different ways for a number of culinary applications.

Storing Amaranth for Later Use

Amaranth is a great survival grain. While corn and wheat are easily recognizable from a distance, to the unaware, amaranth looks more like some sort of ornamental. In fact, I am willing to bet, before you read this article, you didn’t know there was such a thing as Amaranth! That means you can grow a field of this grain and have it look more like a part of the surrounding woods or a flower garden rather than a source of food to be looted.

Because this plant has many different uses it means you can store it in several ways.

Since part of amaranth is a grain, you might also look into bucketing up that food. It will take a lot of plants to bucket up amaranth but if you do you can store it for the long term. You will need the typical loadout of mylar bags, O2 absorbers, and 5-gallon buckets. I would recommend 1-gallon bags for storing. Treat the grain as you would any other long-term stored grain.

Probably the best method for the stewed-up greens, canning will give you access to those great greens for the long term. You can also do dishes including the greens like stews. Your flour mixes are also great things to can, as well, whether it is in a tin can or pressurized glass jar.

Remember those delicious amaranth pancakes we talked about earlier? You should can all the dry ingredients for that recipe and just add some melted butter, milk, and egg for breakfast in a flash. Make your own QuikMix Pancakes!

Amaranth can also be frozen. While this is not the most favorable means of storing food because freezers can go down with the grid, it can keep your amaranth around for later use. When the grain thaws you can use it as though it were fresh, to grind or to simmer.

The time is right to be able to glean from this world of ours the best it has to offer. And for far too long, we have relied on the mundane and customary. It’s come for us to start looking at nontraditional and ancient foods for sustenance. These foods don’t make it into supermarkets for a number of reasons, but they thrive heartedly in our backyards. The entire landscape of food sourcing and production must change.

With the floods and droughts, and natural calamities galore our mass farming interests are struggling. One or two more years of this type of strain could break the distribution chain for a good long while. To be completely self-reliant we need to be realistic about the state of growing lands in this nation, they are being destroyed, sold, and void of any nutrition.

Future strife will be fought over water and food among other precious resources. Amaranth is not even on their radar let alone keenly sought after. Take the time now to prepare using ancient native foods that grow in your backyard and long-term food storage methods.

Amaranth is just one example of one such ancient superfood that is coming back into full use. We’ll keep you posted on what else comes into view.